RUF Records will be releasing the next Wentus Blues Band CD “Woodstock” in March. The Cd has been recorded in Woodstock, NY at Levon Helm Studios.

A wooden, somewhat colorless house is seated in the sun of Overlook Mountain in Woodstock, New York. By the lake right next to it, two dogs–Muddy and Lucy–play around, maybe barking a bit. Music’s ringing from inside the house, but you can still hear the early autumn wind blow. It’s September 2010. These are the Levon Helm Studios.

Upstate New York may not be the likeliest of places to find Scandinavian individuals, let alone in a group of seven. But here they are: Wentus Blues Band, an ensemble from mid-western small-town Finland, formed by a bunch of teenagers some twenty-five years ago. The guys are grown men now, but still have no trouble operating under the watchful eye of Clas Yngström, their experienced producer from Sweden.

Four members remain from the original lineup–Mikael “Axeli” Axelqvist, as drummer the heartbeat of the band; guitarist Kim Vikman, who through the years has earned the self-explanatory nickname of “Hiding”; Niko Riippa, a guitarist with a very special relationship with blues legend and fellow Levon Helm Studios veteran Louisiana Red; and Robert “Robban” Hagnäs, bassist, who as the untiring promoter is one of the secrets to Wentus Blues Band’s long lifespan.

Here in Woodstock, and for the past several years for that matter, the four are joined by singer/percussionist Juho Kinaret and keyboardist Pekka Gröhn, the former being a true wildman and a discovery from the northern city of Oulu. The latter, slightly the others’ senior, has a resumé impressive enough to be the Who’s Who in Finnish music.

The group’s work ethic is phenomenal; it is fueled not only by the impeccable skills of engineer Justin Guip, but also by local proprietors’ products: Lorenzo’s pizza in Kingston, NY, hefty dinners of the Skytop Steakhouse, and hearty breakfasts of the hippie-ish Oriole9 in Downtown Woodstock. What they accomplish is no less than fourteen new songs in the can in just four days.

Levon Helm Studios bore this music and these songs along its way. The best twelve tracks are what you are listening to on The Woodstock Album. The sounds and lyrics come straight from the band members’ lives. Everything you hear is new and original: songs by Riippa, Kinaret, Hagnäs and Gröhn, as well as contributions from Yngström and none other than Cream lyricist Pete Brown.

Wentus Blues Band brought a piece of their local history to Woodstock. We hear about Selma, a characterization of mid-western Finnish ladies of the years past who dreamed about leaving it all behind–so the Selmas set their sights abroad and left their poor old men at home. From folklore, we smoothly move to things more topical. All the way to Facebook!

These guys can play. They can play everything from jumpy blues to hard-hitting rock and roll. They shift fluently from one style to another, all of the time inspired by the surrounding, strictly wood-only construction that Levon built. If these walls could talk…

And Mr Helm himself? There he is, in a bathrobe, stomping up and down the stairs with his beloved dogs, of whom you’ve heard earlier. Hi guys! Welcome to Woodstock, says the living legend in a kind and gravely voice, complete with a wide, all-American smile.

Levon Helm Studios are the first witness of this album. The group may have thought and composed the music before they actually arrived, but Wentus Blues Band’s Woodstock Album was rehearsed, recorded live and mixed right there, inside the walls of Levon Helm Studios. 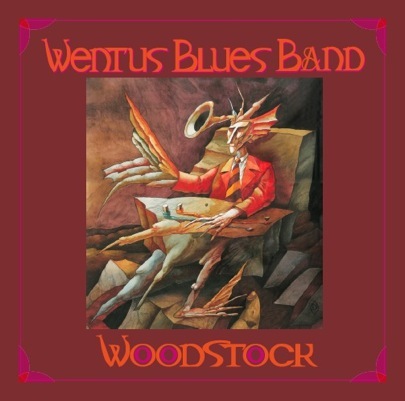