The band from the city of Kokkola in midwestern Finland was awarded for their 20-year career in advancing blues and roots music in the country. The prize was handed out by the Blues Lovers association.

Last Tuesday saw the birth of a new Finnish blues tradition. The Blues Lovers association (based in the southern area of Pirkanmaa) handed out the first-ever Jemma Award to the Wentus Blues Band. The group comes from the midwestern city of Kokkola. WBB celebrated the band’s 20th Anniversary two years ago.

Wentus Blues Band have advanced blues and roots music in Finland and promoted Finnish blues skills abroad, too. During their twenty-two years on the road, they have had more than 2,000 gigs in 15 different countries. In addition, they have cut eight albums.

Guest artists in Finnish and European tours have included the likes of Louisiana Red, Eddie Kirkland, Mick Taylorand Barrence Whitfield. Bassist and primus motor Mr Robert “Robban” Hagnas is known to be an industrious man with the best blues contacts in Finland. His enterprise DP Agency is going to bring a number of nice acts to Finland next spring as well: at least Gene Taylor, Dr Feelgood, Two Timers and The Fabulous Thunderbirds are on their way.

Another chapter in the book of the Wentus Blues Band is the documentary film “Family Meeting”. Most of the material was shot two years ago, as the band was celebrating its 20th Anniversary with a three-night concert series in Helsinki’s historical Alexander Theatre. Those three nights as such were exceptional in the Finnish scale: in addition to the guests mentioned above, among others Sven Zetterberg, Omar Dykes, Lazy Lester and Kim Wilson took the stage.

The film, directed by Mr Heikki Kossi, is pure quality (it was nominated for the National Film Award) and has a lot of warmth to it. Mr Kossi was inspired by e.g. D.A. Pennebaker movies, but “Family Meeting” has often been compared to Martin Scorsese‘s classic “The Last Waltz”.

Working with a wide variety of international guest stars should not make one forget that the Wentus Blues Band are a fine group by themselves, too. One example of this is their latest studio album, “Agriculture” from the spring of 2007.

Mr Aarno Rissanen, chairman of the Blues Lovers, stated that the Jemma Award is going to be an annual tradition. Awards of the type have long international traditions, and there is demand for a Finnish one as well. The award itself is a stylish and classy knife, standing on a wooden base and hand-crafted by Mr Ari Nevalainen, secretary of the Blues Lovers association. 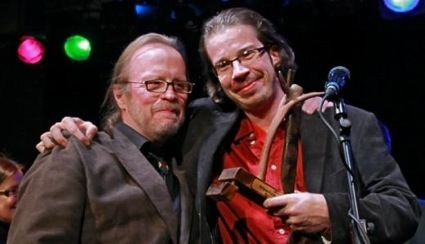