..uses a – early 80´s Squier guitar that he has been playing since he was 12 years old, so you can actually say that the guitar is a part of his body. Niko is a nice guy and his interests are: reading books, taking long walks, listening to music, philosophize about the matter of being. He loves being on long tours and when he´s not on the road, he is hiding out either in Helsinki or in Nedervetil. Niko has so far used about 200 km of guitarstrings and has not yet received a sponsordeal.

Niko is also a original member of the band and when he is not out with Wentus, you can see him with his own band Niko Riippa´s Flying Circus. Niko has released several soloalbums. 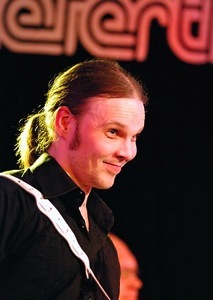